Allan Wells Edinburgh born sprinter won 100 meters at Moscow Olympics in 1980, First Briton since Harold Abrahams to win 100m, American Mel Lattany told Wells regardless of who was running he would have won Olympic gold in Moscow 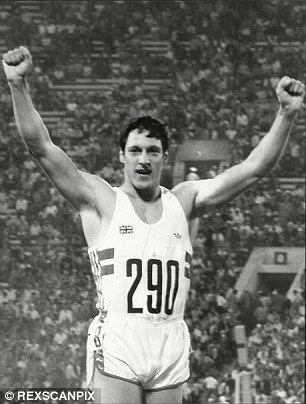 Allan Wells Edinburgh born sprinter won 100 meters at Moscow Olympics in 1980, First Briton since Harold Abrahams to win 100m, American Mel Lattany told Wells regardless of who was running he would have won Olympic gold in Moscow

“Five things you should know about Scottish sprinter Allan Wells

The sprinter, born in Edinburgh, became a household name in 1980 when he won gold in the 100 metres at the Moscow Olympics in 1980. Here are five facts you may, or may not, know about the legendary athlete.

He almost missed the 1980 Olympics The Scot would eventually edge out Cuban athlete Silvio Leonard in a incredibly tight race, with both men finishing on a time of 10.25 seconds. Wells later credited the early dip he performed as the pair crossed the finishing line for his victory.

However, the sprinter nearly missed the games completely when, just a couple of days before the British team were due to fly out, he pulled up with a back strain which stopped him from training. Rather than hinder his chances, Wells believes it proved to be beneficial, as he was well rested and raring to go when it finally came time to race.

In winning the 100m, he became the first Briton since Harold Abrahams to win a 100m title at the Olympics, and the first Scottish sprinter to win on the track since Eric Liddell. Both of those accomplishments were set in 1924, 56 years before Wells’ triumph.”

“Wells was put under severe pressure to withdraw

Several countries, including the United States, boycotted the 1980 Moscow Games after the USSR sent troops into Afghanistan. The British government, led by Prime Minister Margaret Thatcher, wanted to follow suit in a show of solidarity with their political allies. However, Thatcher didn’t have power over the British Olympic Association, who stood by the athletes who wanted to compete.”

“He would defy his critics just two weeks later

Because Wells won the gold with so many athletes missing due to the boycotts, many detractors thought it was a tainted victory. Had the Americans, particularly Stanley Floyd and Mel Lattany, been present at Moscow, then surely they would have won, so the argument went. Fired up by such talk, Wells decided to race in Germany just two weeks after his gold medal win. Still plagued by back trouble and exhausted after a tiring season, it was a huge gamble to take. Had he lost, the critics would forever have held the ammunition to degrade his accomplishment. But Wells was determined to prove to everyone that he was the finest sprinter in the world. And so he did. Beating the field to win the final, Wells was approached by Lattany shortly after the race finished. The magnanimous American wanted to let the Scotsman know that, regardless of who was running, Wells would have won Olympic gold in Moscow.”