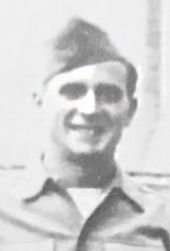 “GREENSBORO This is an obituary like no other, fitting for a man who was one of a kind. Charlie D passed away peacefully at his home, surrounded by his adoring family, on Sunday, March 11, 2018. He was extremely proud to be the last man standing out of ten brothers and sisters. He loved to point out that only 1.7% of the population live past the age of 100. Charlie often joked about being the oldest guy in the room everywhere he went. He loved to ask strangers to guess his age and loved it when they were off by a mile. Born in North Collins, New York on September 24, 1917, Charlie was the fifth son of Sicilian immigrants Maria Grazia and James Vincent DiMaria. Like many Depression-era kids, he dropped out of school in the eighth grade to help in his family’s produce business. By the late 1930s, after adventures hopping on freight trains to Idaho to work on farms and to Florida to pick produce, Charlie found himself working in construction at Fort Dix, NJ as the nation ramped up to enter World War II. In April, 1941, Charlie was among the first in his area to be drafted into the Army. In 1942, his unit landed in North Africa. He was assigned to the 2nd battalion, 68th Coast Artillery (anti-aircraft) as a machine gunner, providing security for the Casablanca Conference. After fighting their way across Morocco, Tunisia and Libya, they sailed for Palermo, Sicily just as the last German forces were evacuating. Charlie said he actually enjoyed his time in Sicily. He claimed it was “almost like being at home,” as his parents were born just outside the city and he spoke the language. Charlie was particularly proud of his experience, making the run with George Patton’s Third Army to Bastogne to relieve the 101st Airborne Division during the Battle of the Bulge. In 1943, Charlie’s unit sailed for bitter fighting up the boot of Italy and in January 1944 they participated in the four-month siege of Anzio in Northern Italy. By 1944 they were involved in the invasion of Southern France, then began their push into the Rhineland, Central Europe, Austria, Belgium and Germany. Charlie was enjoying a three-day leave in London when victory in Japan was finally declared. He continued to enjoy his time in London for 6 more weeks awaiting a troop ship to take him back home. He was discharged from the Army at Fort Dix, NJ, the same base he helped build five years before. He immediately went to Greensboro, to marry Viola Moore, the sweetheart he had met during his Army training in North Carolina.”

“He never left home without his black “Patton’s Third Army” cap. He loved it when strangers acknowledged and expressed appreciation for his World War II service. He liked it even more when it prompted someone to pay for his dinner!”