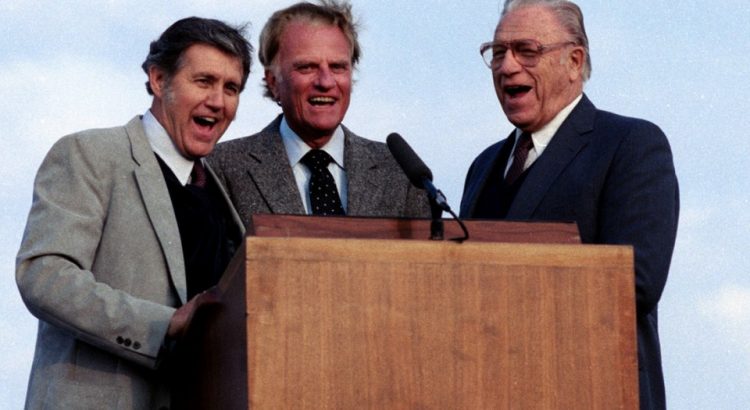 “Graham’s ministry spanned more than six decades, and his evangelical “crusades,” as he called them for most of his career, touched every corner of the world. He proclaimed his message of salvation through repentance and commitment to Jesus in the poorest of Third World villages and in the world’s highest centers of power and authority.

In addition to his mass rallies and serving as spiritual adviser to U.S. presidents, he reached millions more through a syndicated newspaper column and best-selling books.

Mr. Graham – he preferred this salutation over “the Rev.” – was a frequent guest at the White House, and he delivered the invocations at presidential inaugurations and national political conventions. In the royal chapel at Britain’s Windsor Castle, he preached before Queen Elizabeth II and Prince Philip. He traveled to combat zones in South Korea and Vietnam to pray with U.S. service members.

An accomplished showman with a down-to-earth theology, Graham preached with a burning sincerity, although he generally avoided the exaggerated theatrics of the stereotypical Bible-thumping revivalists of an earlier era.

He was charming, tall and handsome, always immaculately dressed, and he had an engaging smile. As he aged, his hair turned snow-white. His delivery was varied and dramatic, liberally laced with a stream of self-deprecating anecdotes, and he was an extraordinarily effective proselytizer.

“Are you frustrated, bewildered, dejected, breaking under the strains of life?” Graham would ask his audiences. “Then listen for a moment to me. Say yes to the savior tonight, and in a moment you will know such comfort as you have never known.”

Millions accepted his invitations to come forward and “make a decision for Christ” over the years of Graham’s ministry, although his critics liked to cite published statistics that 80 to 90 percent of these people were church members who were reaffirming their faith.

William Martin, a professor of sociology at Rice University, called him “the most powerful evangelist since Jesus” in a 2002 article in Texas Monthly magazine.

Martin, author of a 1991 Graham biography, “A Prophet With Honor,” wrote that Graham was singularly influential in trying to restore American evangelism’s good name.”

“In 1981, he prayed at the bedside of Ronald Reagan when the president was seriously wounded in an assassination attempt. In January 1991, when the United States began the Persian Gulf War with air attacks against Iraq, Graham spent the night at the White House. The next day, he preached a sermon to the nation’s leaders telling them that “there comes a time when we have to fight for peace.”

In 1989, he delivered the invocation and benediction at George H.W. Bush’s inauguration. Former president George W. Bush said Graham, while on a visit to the family vacation home in Kennebunkport, Maine, “planted the seeds” of his Christian conversion.

Graham was especially close to Richard M. Nixon, and he sat in on the political strategy session in which Maryland Gov. Spiro T. Agnew was chosen as Nixon’s running mate in the 1968 presidential election.”

“Widely admired among rank-and-file Christians, Graham had been included in the Gallup Organization’s annual list of the 10 most admired people in the world at least 49 times since 1948, more than any other person.

But many academicians and theologians criticized Graham’s message as too literal and overly simplistic, offering a form of “instant redemption” based on emotional appeal.

His interpretation of the Bible was essentially a fundamentalist one, but as his ministry developed, many non-fundamentalist Christian clergy came to regard it as enlightened. Graham always took care to operate within the framework of mainstream Christianity, and he generally left his converts with the exhortation, “Above all, go to church.”

In 1964, Cardinal Richard J. Cushing, then the Catholic archbishop of Boston, declared that no Catholic who heard Graham preach “can do anything but become a better Catholic.””