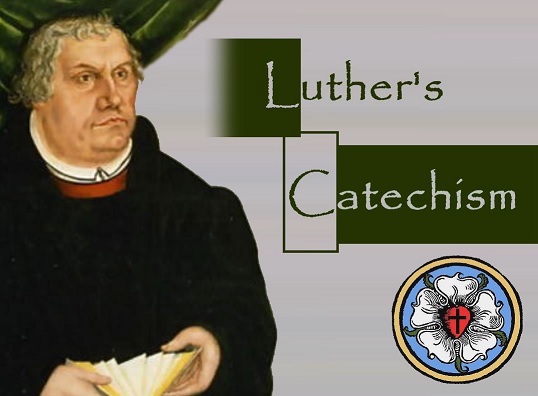 “This I must unfold somewhat more plainly, that it may be understood and perceived by ordinary examples of the contrary. Many a one thinks that he has God and everything in abundance when he has money and possessions; he trusts in them and boasts of them with such firmness and assurance as to care for no one. Lo, such a man also has a god, Mammon by name, i.e., money and possessions, on which he sets all his heart, and which is also the most common idol on earth. He who has money and possessions feels secure, and is joyful and undismayed as though he were sitting in the midst of Paradise. On the other hand, he who has none doubts and is despondent, as though he knew of no God. For
very few are to be found who are of good cheer, and who neither mourn nor complain if they have not Mammon. This [care and desire for money] sticks and clings to our nature, even to the grave.

So, too, whoever trusts and boasts that he possesses great skill,
prudence, power, favor friendship, and honor has also a god, but not
this true and only God. This appears again when you notice how
presumptuous, secure, and proud people are because of such
possessions, and how despondent when they no longer exist or are
withdrawn. Therefore I repeat that the chief explanation of this point is that to have a god is to have something in which the heart entirely trusts.”

Thou shalt not take the name of the Lord, thy God, in vain.

As the First Commandment has instructed the heart and taught [the
basis of] faith, so this commandment leads us forth and directs the
mouth and tongue to God. For the first objects that spring from the
heart and manifest themselves are words. Now, as I have taught above how to answer the question, what it is to have a god, so you must learn to comprehend simply the meaning of this and all the commandments, and to apply it to yourself. If, then, it be asked: How do you understand the Second Commandment, or what is meant by taking in vain, or misusing God’s name? answer briefly thus: It is misusing God’s name when we call upon the Lord God no matter in what way, for purposes of falsehood or wrong of any kind. Therefore this commandment enjoins this much, that God’s name must not be appealed to falsely, or taken upon the lips while the heart knows well enough, or should know, differently; as among those who take oaths in court, where one side lies against the
other. For God’s name cannot be misused worse than for the support of falsehood and deceit. Let this remain the exact German and simplest meaning of this commandment.
From this every one can readily infer when and in how many ways God’s name is misused, although it is impossible to enumerate all its
misuses. Yet, to tell it in a few words, all misuse of the divine name
occurs, first, in worldly business and in matters which concern money, possessions, honor, whether it be publicly in court, in the market, or wherever else men make false oaths in God’s name, or pledge their souls in any matter. And this is especially prevalent in marriage affairs where two go and secretly betroth themselves to one another, and afterward abjure [their plighted troth].
But. the greatest abuse occurs in spiritual matters, which pertain to
the conscience, when false preachers rise up and offer their Lying
vanities as God’s Word. Behold, all this is decking one’s self out with
God’s name, or making a pretty show, or claiming to be right, whether it occur in gross, worldly business or in sublime, subtle matters of faith and doctrine. And among liars belong also blasphemers, not alone the very gross, well known to every one, who disgrace God’s name without fear (these are not for us, but for the hangman to discipline); but also those who publicly traduce the truth and God’s Word and consign it to the devil. Of this there is no need now to speak further.”
“Therefore let every one know that it is his duty, at the risk of God’s
displeasure, not only to do no injury to his neighbor, nor to deprive
him of gain, nor to perpetrate any act of unfaithfulness or malice in
any bargain or trade, but faithfully to preserve his property for him,
to secure and promote his advantage, especially when one accepts money, wages, and one’s livelihood for such service.”

“For we are so inclined by nature that no one desires to see another
have as much as himself, and each one acquires as much as he can; the other may fare as best he can. And yet we pretend to be godly, know how to adorn ourselves most finely and conceal our rascality, resort to and invent adroit devices and deceitful artifices (such as now are daily most ingeniously contrived) as though they were derived from the law codes; yea, we even dare impertinently to refer to it, and boast of it, and will not have it called rascality, but shrewdness and caution. In this lawyers and jurists assist, who twist and stretch the law to suit it to their cause, stress words and use them for a subterfuge, irrespective of equity or their neighbor’s necessity. And, in short, whoever is the most expert and cunning in these affairs finds most help in law, as they themselves say: Vigilantibus iura subveniunt [that is, The laws favor the watchful].”

“Now, this occurs most frequently in cases that are brought into court, where it is the purpose to get something from our neighbor and to force him out of his own. As (to give examples), when people quarrel and wrangle about a large inheritance, real estate, etc., they avail themselves of, and resort to, whatever has the appearance of right, so dressing and adorning everything that the law must favor their side, and they keep the property with such title that no one can make complaint or lay claim thereto. In like manner, if any one desire to have a castle, city, duchy, or any other great thing, he practices so much financiering through relationships, and by any means he can, that the other is judicially deprived of it, and it is adjudicated to him, and confirmed with deed and seal and declared to have been acquired by princely title and honestly.

Likewise also in common trade where one dexterously slips something out of another’s hand, so that he must look after it, or surprises and defrauds him in a matter in which he sees advantage and benefit for himself, so that the latter, perhaps on account of distress or debt, cannot regain or redeem it without injury, and the former gains the half or even more; and yet this must not be considered as acquired by fraud or stolen, but honestly bought. Here they say: First come, first served, and every one must look to his own interest, let another get what he can. And who can be so smart as to think of all the ways in which one can get many things into his possession by such specious pretexts? This the world does not consider wrong [nor is it punished by laws], and will not see that the neighbor is thereby placed at a disadvantage, and must sacrifice what he cannot spare without injury. Yet there is no one who wishes this to be done to him; from which we can easily perceive that such devices and pretexts are false.”

“In whatever way such things happen, we must know that God does not wish that you deprive your neighbor of anything that belongs to him so that he suffer the loss and you gratify your avarice with it, even if you could keep it honorably before the world; for it is a secret and insidious imposition practiced under the hat, as we say, that it may not be observed. For although you go your way as if you had done no one any wrong, you have nevertheless injured your neighbor; and if it is not called stealing and cheating, yet it is called coveting your neighbor’s property, that is, aiming at possession of it, enticing it away from him without his will, and being unwilling to see him enjoy what God has granted him. And although the judge and every one must leave you in possession of it, yet God will not leave you therein; for He sees the deceitful heart and the malice of the world, which is sure to take an ell in addition wherever you yield to her a finger’s breadth, and at length public wrong and violence follow.”

“Here we have again the Word of God whereby He would encourage and urge us to true noble and sublime works, as gentleness patience, and, in short, love and kindness to our enemies, and would ever remind us to reflect upon the First Commandment, that He is our God, that is, that He will help, assist, and protect us, in order that He may thus quench the desire of revenge in us.
This we ought to practice and inculcate and we would have our hands full doing good works.”