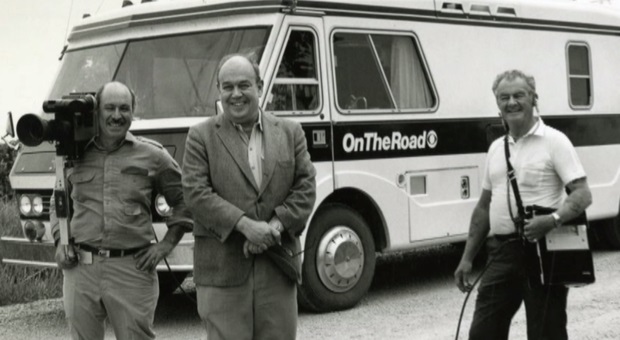 “‘ON THE ROAD’ REPORTER CHARLES KURALT DIES AT 62

Charles Kuralt, 62, the folksy CBS news reporter who chronicled the offbeat and endearing as he traveled U.S. highways and byways for his “On the Road” reports, died July 4 at a hospital in New York.

He died as a result of complications from lupus, an inflammatory disease that can affect the skin, joints, kidneys and nervous system.

Mr. Kuralt, a balding, pudgy, and intrepid traveler, logged as many as 50,000 miles a year inside his motor home, scouring the country for rarely seen glimpses of Americana.

Over the years, his travels enabled him to find off-the-beaten-path stories about features such as a school for unicyclists, horse-trading and a gas station-poetry factory. He interviewed professional wrestlers, a 104-year-old entertainer who performed in nursing homes, lumberjacks, whittlers and farmers.

“He had just touched something that audiences responded to,” CBS colleague Charles Osgood said this morning. “If we could think of something better to do, we’d do it. But nobody can.””

“Mr. Kuralt, who was born in Wilmington, N.C., was the son of a social worker and a teacher. His skills as a writer became evident early, when he won an American Legion essay contest, winning a trip to Washington and a meeting with President Harry S. Truman.

It was Edward R. Murrow, the legendary CBS reporter, whose voice on the radio inspired Kuralt to try journalism. Mr. Kuralt edited the student newspaper at the University of North Carolina, where he graduated in 1955. He won the 1956 Ernie Pyle Memorial Award for his offbeat, human interest columns — an interest that served him well after his switch to television.”