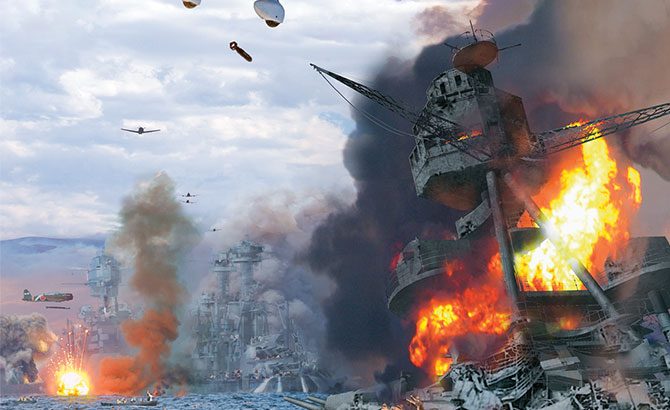 From the Wilmington Star News.

A Durham native, Hendley enlisted in the Navy in 1937 and was assigned to the battleship USS Oklahoma.

On the morning of Dec. 7, 1941, the Oklahoma was moored on Battleship Row at Pearl Harbor, Hawaii. Hendley was taking a shower with eight other sailors when the Japanese air attack began. As many as eight torpedoes hit the Oklahoma’s side. The ship quickly listed to port and capsized within 10 minutes.

Guided by a chief petty officer, Hendley and the other young men from the shower quickly slipped through a porthole. The chief, a large man, couldn’t fit; the last they heard was the man saying a final prayer.

Hendley and his comrades swam through oily water to the beach. There, they were given clothes and issued rifles to guard against an infantry assault that many expected would come any minute.

They were lucky. Although civilian salvage workers were able to save 32 Oklahoma crewmen trapped below decks, hundreds more drowned or suffocated before the battleship could be righted.

After Pearl Harbor, Hendley was reassigned to the minesweeper USS Spray. As a crew member, he participated in the Allied landings at Anzio, Italy, in January 1944, and in the south of France in August 1944.

Hendley remained in the Navy after the war and retired from active duty in 1959. Returning to Durham, he worked for the U.S. Postal Service for 20 years, then relocated to the Wilmington area, where he worked in real estate.

“He was a very humble man,” said his son, Bill Hendley. “He never talked about Pearl Harbor very much.””