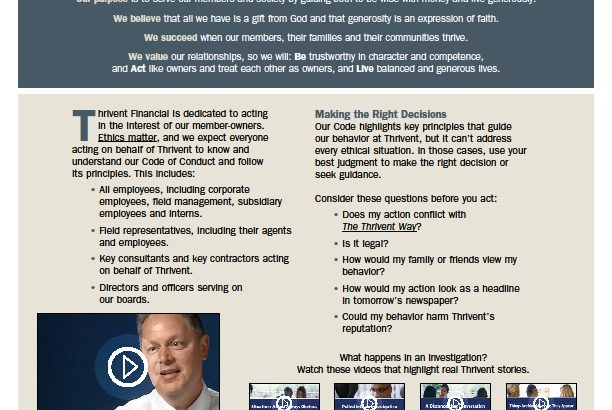 Forum question: “Does anyone have knowledge about investing at Thrivent Financial for Lutherans?”

“Don’t mix friendship, church and investing. Tell her to stay put; there’s simply no reason to invest in loaded high expense funds, simply because they’re associated with Lutherans. That’s not a valid reason for changing, especially in light of the fact that it will cost her more for less.”

“I just want to reinforce Mel’s recommendation speaking to you as one Lutheran (ELCA)–with a Lutheran minister brother-in-law and strong family associations with Augustana College and California Lutheran College– to another.

Do not leave Vanguard for Thrivent–it will be a costly and foolish decision.”

“The church connection is tenuous at best. Basically, she’ll be paying a whole lot more for the exact same investments that she can get at Vanguard, namely much higher expense mutual funds. The Thrivent guy/gal is a broker, pure and simple. Or as the regulators call him/her, a registered representative. He/she is a salesperson, nothing more. Any Lutheran connection is merely a way to increase sales. Just like the First Command bozos that played up their “we only help military people” which should read, “we only screw military people out of thousands of $$ by putting them into really, really high priced mutual funds and insurance.””

“:lol: Looks like he is picking them off one at a time. Gotta love that church directory!!!

As I said earlier, stay with VG and avoid the Thrivent/Lutheran Kool-Aid….”

“Ditto everything above. My Mother was put into a Thrivent annuity wrapped inside an IRA with high expenses. High early withdrawal fees.

If you want to help the church, stay away from Thrivent and put your fund expense savings in the offering plate.”

“Whoa, this is like the most fired up I’ve ever seen a bunch of Lutherans. Goodness gracious!

It’s very unfortunate that people use some kind of civic connection to help themselves rather than those they purport to be looking out for. ”

“We actually have an insurance policy for my husband which was taken out when he was a child originally with Lutheran brotherhood and what is now Thrivent. Thrivent does not like to have their mutual funds written about by the financial press, I remember that they got quite snotty with some reporter who was trying to get information about some of the mutual fund offerings.”